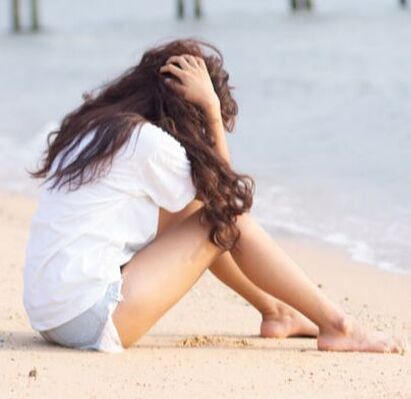 Elyse struggles with severe depression, the kind that’s so bad she doesn’t even want to get out of bed sometimes. She feels sad and empty, she can’t enjoy anything, and she’s constantly thinking negative thoughts about herself. She recognizes the things that she should be able to enjoy—the ocean breeze, the blue sky, the tastes of her favorite foods. But she isn’t feeling any of it.

It’s easy to misunderstand someone who’s depressed as, “Oh, they never like to do anything fun,” or “They’re always complaining.” It’s easy to get annoyed: “I made your favorite meal; why aren’t you eating anything?” “I thought you loved this game, why don’t you want to play?” “You’re canceling again; are you kidding me?” What’s important to understand about depression is that it’s a huge mental burden that can weigh someone down so much that sometimes even the mere thought of interacting with other people is exhausting.

Some days are better than others. People who are depressed can still find happiness, peace, and moments when they feel normal. Though they’re sometimes tempted to push people away, they need friends just as much as—or maybe more than—everybody else. Sometimes it’s just good to be there for someone, even if you’re not actually doing anything. Elyse finds that spending time with Ashlynn and Ryan helps alleviate some of the symptoms of her depression. She likes Ashlynn because Ashlynn is quiet and doesn’t expect a lot of conversation, and because she feels a sense of connection with her—they’re both different, they both have difficulty interacting with people, they both sometimes feel like shutting out the world. She likes Ryan because he accepts her for who she is and doesn’t try to make her do anything she doesn’t want to do. Over time, both Ryan and Ashlynn help Elyse recognize her own positive qualities, which improves her self-image. By the end of the book, although depression is still something Elyse experiences, she has a more positive outlook and has learned how to better manage her condition.
​
If you think you might be depressed, and you haven’t addressed it yet, start by talking to your parents or another adult you can trust. Depression is something that can be treated, but it doesn’t just go away on its own.
Waves Tough Stuff
Powered by