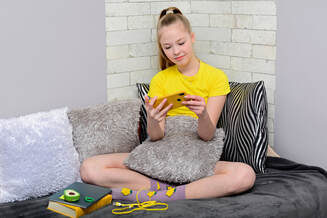 Lacey had no romantic interest in anyone at the time, and that was the way she wanted it, because she wanted to focus on her studies. Travis, meanwhile, developed a crush on Alanna, and told Lacey about it. Lacey was fine with Travis liking Alanna, and even did what she could to help them get together (such as choosing not to go on the bike ride so Travis and Alanna could have some time alone together).
​
It’s actually really nice to have a friend of the opposite gender who doesn’t like you in a romantic way, and who you don’t like in a romantic way either. One of the cool things about it is that when you’re trying to start a romantic relationship with someone, your opposite-gender friend might be able to help you understand that person’s perspective a little better. I’m not saying they’ll have all the answers, or that all their advice will be good. And you can’t generalize a whole gender based on one person. But it still might be more helpful than getting advice from a same-gender friend.
I Didn't Plan This Crushes&Dating
Powered by