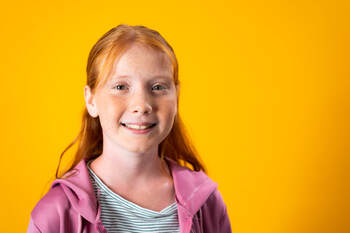 Daniel and Madalaine met on the bus on the first day of junior high, and hit it off right away. They spent the whole bus ride chatting and learning everything they could about each other, much to Alanna’s chagrin. And then they found out they had all their core classes together!

Daniel and Madalaine’s relationship started off as a friendship, but even Alanna could tell (though she didn’t want to admit it) that they both had a crush on each other. Could you tell that they liked each other, even before it was officially revealed in the book? What were some of the telltale signs?
​
At Amanda's sleepover, Madalaine shared the exciting news that she and Daniel had been dating for two and a half weeks. When asked whether they had kissed yet, Madalaine replied, "We haven't really been dating long enough to kiss." A lot of people think that things like kissing and holding hands are essential in a boyfriend-girlfriend relationship, but in reality, there are much more important elements--such as getting to know each other and spending time having fun together.
I Didn't Plan This Crushes&Dating
Powered by