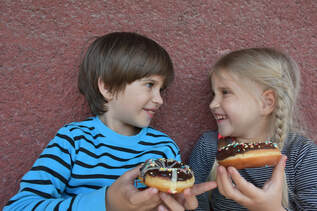 Alanna was five when she decided she wanted to marry Daniel someday. At that time, Daniel was totally on board with the idea. What could be better than marrying your best friend?

By junior high, though, Daniel had figured out that he didn’t like Alanna in that way. He liked Madalaine.
​
This made Alanna extremely jealous. How dare Daniel go out with someone else, when everyone knew he was supposed to be with her? Alanna let her jealousy get in the way for a little while, but when she realized she missed Daniel and Madalaine, she pushed it aside. She was able to remain friends with both of them despite wishing they weren’t a couple.

Alanna was so caught up in her idea of the way things were “supposed to be,” based on what she and Daniel had decided when she was five, that it took her a while to stop and think about whether she actually liked Daniel as more than a friend. It wasn’t until the sleepover that she realized that her jealousy had been more about the fact that Daniel now had other friends than that he was dating someone. Once she realized this, she was able to totally let go of the idea of her and Daniel as a couple. She even found that she could be happy about Daniel and Madalaine’s relationship.

Sometimes, you'll have your heart set for a long time on becoming romantically involved with a certain person, and then eventually you'll realize that they're not the one for you. Sometimes what we think we want isn't what we actually want.
I Didn't Plan This Crushes&Dating
Powered by