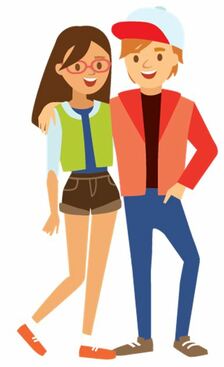 Allisen never thought she and Jack would become boyfriend and girlfriend. All throughout middle school, she practically bit the head off of anyone who insinuated that they liked each other as more than friends.  Until ninth grade, when she learned that he had a crush on her…. which led to her realizing that she had a crush on him, too.
​
But did it really take that long for her to start having feelings for him? As Allisen mentions to Jack in Book #54, “Shh! Don’t Tell!”, she was jealous back in seventh grade when she thought Jack liked a different girl. Perhaps she liked him all along (which would explain why she always reacted so strongly to the insinuations). But back then, she wasn’t ready for a boyfriend.

By tenth grade, she is ready for a boyfriend. And she’s over-the-moon excited to finally kiss Jack! But her excitement turns to worry when she realizes she hadn’t thought at all about what would happen after they had their first kiss.
​
The awkward feelings and moments Allisen and Jack go through in the days following their first kiss are hardly ever depicted in books or movies, but I imagine they’re pretty common in real life. Especially for teenagers, and especially especially for a first relationship, there are all sorts of questions that come up. What does it mean to be “in a relationship”? Now that we’ve kissed once, do we do it all the time? Does kissing automatically make us boyfriend and girlfriend, or do we need to formally discuss it?  It’s different with every couple and every situation, but Allisen’s mom has some pretty universal advice: be honest with each other, care about each other, be respectful, honest, and true to one another.
Powered by