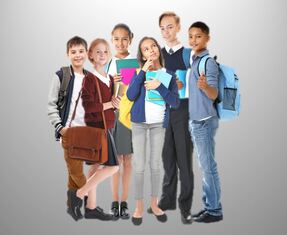 Lynn doesn’t have the easiest time making friends when she starts attending school in New York City. None of her classmates are particularly welcoming, and she’s afraid to get too close to anyone because she doesn’t want questions about her family situation. Because her family situation is constantly what’s on her mind, she assumes it will be on all of the other kids’ minds as well—even though in reality, they are all probably far too caught up in their own lives to care why Lynn is living with her grandparents.

At first, Lynn passes the quick judgment that all of the kids at her new school are “jerks.” This turns out not to be the case, as she finds out when kids like José and Megan start talking with her. Although none of them share her interest in racquetball, they include her in their recess games and invite her to spend time with them.
​
By the end of the month and a half that Lynn has been living in New York City, she hasn’t become close friends with any of her classmates, but she is less standoffish than she was when she first arrived. If she had stayed in New York longer, do you think she would have ended up forming friendships with any of her classmates?
That's the Way the Racquetball Bounces Details
Powered by