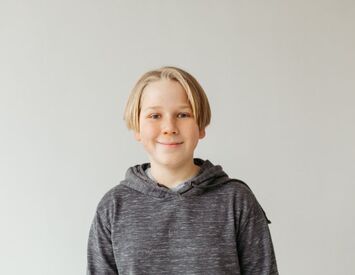 The first time Lynn sees Jerr at the racquetball club, she makes the assumption that he has “a cocky attitude.” When she starts talking with him, she is annoyed by his manner of speaking and his tendency to give people nicknames. Once he beats her in the first game of racquetball they play together, she decides she never wants to see him again.

Throughout Lynn’s first several encounters with Jerr, she maintains her beliefs that Jerr is annoying, obnoxious, and a general pain to be around. She doesn’t like the fact that Jerr is better than she is at racquetball, or that her own grandfather lets him get away with things that she can’t get away with. Her negative view of Jerr causes her to be irritated by everything he does, even though he isn’t trying to annoy her.

As Lynn and Jerr spend more time together, Lynn grudgingly starts to appreciate the fact that she has someone to play with, and doesn’t mind so much when Jerr beats her in racquetball. She realizes that she and Jerr have some things in common, and that Jerr maybe isn’t the jerk she’s always thought of him as. Eventually, Lynn and Jerr share their histories with each other, and hearing about Jerr’s past helps Lynn see him from a new perspective. By the time they’re competing in the tournament, they’re both cheering each other on, and Lynn is genuinely happy for Jerr when he takes first place. When it’s time for her to leave New York, she is already looking forward to the next time she’ll get to see him.
​
What are your thoughts on Jerr, Lynn, and the friendship that they eventually come to share? What makes them a good friendship match for each other?
That's the Way the Racquetball Bounces Details
Powered by