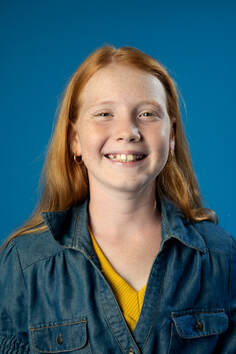 Madalaine was the first new person Alanna met when she started junior high school. She was also Alanna’s first new friend. Madalaine was always friendly, kind, and excited to see Alanna. The first time Madalaine and Alanna met, Alanna “could tell right away that Madalaine was the kind of person who would have a million friends. She just had that natural ability to put a smile on your face.”

Throughout the book, Madalaine’s actions continued to prove that she was a good friend. Any time Alanna was upset, Madalaine was always the first to notice and ask what was wrong. When Tyler tried to take Alanna’s seat at the lunch table, Madalaine demanded that he get up and give it back to Alanna. When Alanna stopped eating lunch with Madalaine and the rest of the gang, Madalaine caught up to her in the hallway and told her, “You can sit wherever you want. I’m just saying that I like having you at our table.” And, as Alanna pointed out, Madalaine went out of her way to share Skittles with her on the bus.

Madalaine showed the extent of her friendship even more at the sleepover, when she double-checked with Alanna about whether Alanna had a problem with her and Daniel dating. She told Alanna, “I really like him, but you know that pact we made at the beginning of the year? I don’t want to break that. And I’d feel really bad going out with Daniel if I knew you wanted to go out with him.”
​
I do not intend to write a sequel to I Didn’t Plan This. However, if I did, I imagine it would show Madalaine and Alanna growing to be very close friends. What do you think?
I Didn't Plan This Friendship
Powered by