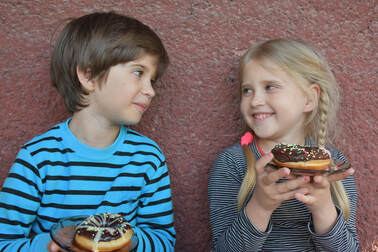 But when they started junior high, Daniel started choosing his own path. He joined clubs and activities without Alanna, and started becoming friends with kids Alanna didn’t really know. This made Alanna upset and jealous.
​
By the end of the book, Alanna and Daniel were still friends, and they had mutually decided that they wanted to keep being friends and keep spending time together. But they both had their own groups of friends too—Daniel had the kids from his classes, and Alanna had the girls from her FCS class.

Sometimes you’ll start to grow apart from a really good friend. Maybe your interests are changing, or your friend’s interests are changing, or maybe both of you are changing. Maybe you’re starting to gravitate more toward a certain crowd of people, while your friend is gravitating toward a different crowd. That’s perfectly normal and natural. But it can also be sad, because you’re no longer spending as much time as you used to with the person who was once your closest friend.
​
At the end of the book, Alanna, Daniel, Travis, and Lacey decided that they were going to make it a point to hang out together at least once a month. Maybe you can plan something like that with your friend, to ensure you don’t lose your friendship. It is possible to have both old and new friends, and to have friends who belong to completely different peer groups. If you believe a friendship is worth it, make every effort to keep it—while allowing it to change with the times.
I Didn't Plan This Friendship
Powered by