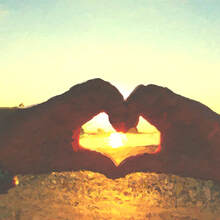 Mariana is attracted to Ryan from the moment she sees him. The attraction only increases the more time they spend together. Everything new she finds out about Ryan just makes her crush on him deepen.

Ryan is attracted to Mariana as well—maybe not from the very beginning, but pretty close. When talking to Elyse, he mentions that he likes Mariana’s “spunk and her personality and everything, how she’s so into life and just ready to jump right in to anything at any given time.”

The two of them spend a lot of time hanging out and flirting with each other, and then Ryan asks Mariana out. She’s ecstatic, but also worried about Ryan discovering her secret.  Ryan senses that Mariana is hiding something, and chooses not to kiss her on the date—something that greatly disappoints Mariana.

Ryan finally gives into his feelings for Mariana the day before she leaves, when she climbs out her window to see him. The two share some sweet words and a romantic kiss. But right after that, Ryan finds out the truth and feels utterly betrayed. Although he is understanding about why Mariana did what she did, he is upset that she lied to him all summer, and decides he does not want to be in a relationship with her.
​
Lies can really mess up a relationship. If you lie to someone once, how do they know you won’t lie to them again, maybe about something bigger next time? Honesty is crucial in making any kind of relationship work.
Waves Crushes&Dating
Powered by