Back to 10th Grade Friendship page 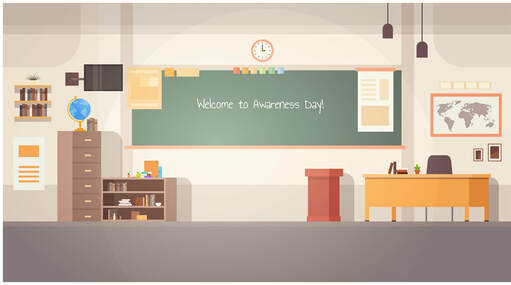 ​Allisen got the idea for Awareness Day when she noticed that some people weren’t being very kind to her friends. Allisen’s friends Nalcie, Ellie, and Rushton each have some sort of difference that sets them apart from most kids. But that doesn’t mean that they don’t have feelings just like everyone else.

Sometimes disabilities are very obvious, as in the case of Nalcie’s Down syndrome. Anybody looking at or interacting with Nalcie would be able to tell that she’s not a typical teenage girl. However, some of Nalcie’s characteristics are quite typical—she wants to be liked, she wants to be included, she wants to go on the mission trip and be independent just like her friends. She’s excited to have a leadership position at the learning center, where she gets to help teach younger children. And she’s so excited to show off her dance moves! Even though Nalcie acts younger than the other kids in Bible study group, they always include her as much as possible—in their discussions, in Awareness Day, and in the games and activities they do while in Nicaragua.

Some kinds of disorders and disabilities can be less obvious. Jack’s Awareness Day station is on dyslexia, which is a learning disability. People with dyslexia look and act like everyone else, and are just as smart as everyone else, but struggle with reading. Katie’s station is on diabetes, which is actually a much bigger health risk than most people think it is. Shevea’s station is on anxiety, and Stivre’s is on bipolar disorder—two mental health issues that may not be obvious on first glance but definitely have an impact on the way people live their lives.

In Rushton’s case, his Tourette syndrome can be seriously annoying—both for himself and for the people around him. Rushton doesn’t look any different from anybody else, so people may not realize that the reason he keeps making noises or moving strangely is because he has to. When he explains the reason behind his behavior, most people are able to accept that, whereas if they didn’t know, they might think badly about him.
​
This was the purpose of Awareness Day—to educate the school community about various differences that set people apart, and to teach people to look for reasons for the behaviors they see. Don’t be afraid to strike up a conversation with “that weird kid” who’s always doing bizarre things. Chances are, there’s a good reason.
Powered by