Back to 8th Grade Friendship page 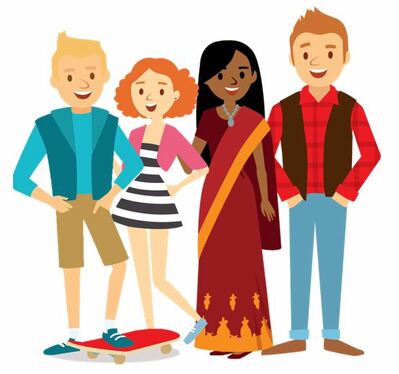 ​Allisen’s primary friends during her eighth grade year are Kim, Shevea, Jack, and Stivre. Allisen and these friends are very supportive of one another, even during difficult situations.

In Book #29, “It’s Good To Bee Smart”, Jack remembers that Allisen is good at spelling, and asks her if she is going to be in the spelling bee. Then he and the others all support her with encouraging comments. They all come to all of her spelling bees, and Kim and Shevea help her study.

In Book #30, “Position of Power”, Jack goes through a little bit of a rough spot while he’s running for president. His friends all agree that he’s acting power-hungry and obnoxious, and they try to help him by giving him advice about his campaign. Even as he becomes more and more unreasonable, his friends still give suggestions about how he could do better. None of them vote for him, but they make it clear that he is still their friend. Allisen and Stivre go over to comfort him in his disappointment after he loses, showing that they are still there for him even after he treated them the way he did.

In Book #31, “All of My Heart”, Allisen, Kim, and Shevea combine their individual talents to create a nonprofit business together. They recognize that they are all good at different things, and they find a way to work together, each doing something they’re good at. Later on, in Book #33, “What Friends Are For”, Allisen and Kim are there for Shevea when she’s going through a difficult time. They encourage her, stand up for her, and try to help her however they can.
​
Stivre is an interesting character during Allisen’s eighth-grade year. Back in sixth grade, he was just one of the most annoying boys in her class. In seventh grade, Allisen still found him a little too goofy and immature, but tolerated him because he was friends with Kim and Jack. Now in eighth grade, we see Stivre slowly transitioning from “not my friend exactly” (Book 25) to being described as “okay” (Book 32), to clearly being part of Allisen’s group of friends by the end of the school year. Sometimes friendships work like that—you’re not crazy about someone to begin with, but over time, after hanging out with them for a while in a group, you eventually come to know them better and consider them your friend.
Powered by